In celebration of the EPA’s proposed carbon regulation… 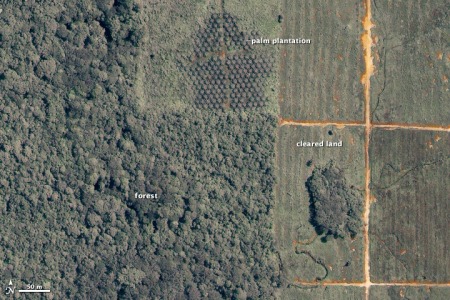 My father changed my perspective on life with a lesson about laundry. One day I ransacked my closet, trying on and tossing several different outfits. Not entirely irresponsible, I put all of the discarded clothes in the hamper.

“When you put clothes that aren’t really dirty in the wash,” he told me, “it wastes water.”

I told my friend this when she went through a similar round of outfit changing. Her response: “Nuh uh.”

While volunteering in Costa Rica, I took a weekend off to visit Manuel Antonio National Park. Passing a stretch of evenly spaced palm trees on the highway along the Pacific, I noticed a strong, rancid smell. Each trunk stood equidistant from the others surrounding it, a pungent grid stretching for acres. Palm oil plantation, the farm manager told me. They’re coming up everywhere.

I didn’t think much about what that meant until I started encountering mentions of palm oil with respect to climate change. In the first episode of Years of Living Dangerously, Harrison Ford flies over wide swaths of Indonesian peat swamp forests burned to make way for palm oil monocultures.

KQED conducted an interview with Frances Seymour, former director general at the Center for International Forestry Research, in which she said that donuts cause deforestation, as do all of the many ubiquitous processed foods containing palm oil.

Today there are plenty of grown adults to reply “Nuh uh.”

Though 97% of scientists agree that human activities—particularly burning fossil fuels—significantly contribute to global warming, lobbyist “think tanks” continue to disseminate misinformation to encourage the misconception that the causes of global warming are still unclear. The more time we waste debating a fact already long acknowledged in the scientific community, the longer we delay making changes to reverse or mitigate our increasingly dire situation.

More concerning to me, though, is the resignation among everyday Americans who consider themselves socially responsible but just don’t want to hear about global warming. It’s too depressing. It’s too big a problem. My individual choices won’t make a difference. I won’t be around by the time it’s a real threat. These rationalizations achieve the same effect as denying. In An Inconvenient Truth, Al Gore describes the dramatic leap from denial to despair. Why don’t more of us dwell on that intermediate step of hope and action?

With the widespread coverage of the U.N.’s Intergovernmental Panel on Climate Change fifth assessment report findings and the U.S.’s Climate Action Report, I hope that claims from deniers will be seen as the money-driven propaganda they are. Fossil fuel investors stand to gain in the short term if we continue to conduct business as usual, but I hope more of us will rally to change our long-term global course. As the reports make clear, some consequences of climate change have already arrived, and they’re only a fraction as severe as what may lie in store.

There are concrete steps we can take to reduce our own contributions to the collective mess we’re in (tons of things we can do today, this week, this year!). But I also hope more of us will admit the problem is here and pressing. Not admit it for an uncomfortable second and push it away, continuing with our habitual behaviors—admit it and hold that truth in mind.

There’s a reason that Buddhism begins with recognition of suffering, or that AA starts with an admission that life has become unmanageable. That deceptively simple act of acknowledging the world as it is takes daily practice. It feels uncomfortable to face the thought that our personal choices, actions, and desires may endanger our lives and our children’s lives, to sit with that knowledge without snapping, “Nuh uh.” But naked clarity is the first step toward change, and change is where our hope lies.