ICYMI, Greg and I published the sixth conversational essay in our occasional series for Berfrois—this time about valuing property over people, the limits of revenge, and the possibilities of resistance:

I don’t think we can maintain our humanity when we dehumanize others, warehouse them, and pay our taxes to agents of the state to kill them. When my father was killed, my mother was immediately and insistently forgiving of the 17-year-old who, we were told, was taken away from the scene in handcuffs. I still don’t know that I forgive him, but I’ve never wanted him ostracized from society. So I joined her in asking the prosecutors not to try him as an adult and not to seek a maximum jail sentence. As it turned out, he served only three months in a juvenile facility, while Daniel McGowan of the ELF served the better part of a decade for injuring, let alone killing, precisely no one. Is that a just exchange for vehicular homicide resulting from street racing and intentionally driving onto an elevated bike and pedestrian path, for altering the course of my and my mother’s life and ending an innocent, hardworking, generous man’s one journey on Earth? I don’t know, but I don’t subscribe to the Code of Hammurabi.

Titled “Anatomy of a Protest; or, We Are Communication-Managed Bodies in Thin Air, and Life Is Good,” the piece discusses the films How to Survive a Plague (2012), Salt of the Earth (1954), and If a Tree Falls: A Story of the Earth Liberation Front (2011). It doesn’t end up where it starts, and we make many detours along the way. We’ve received some fun feedback, like this: 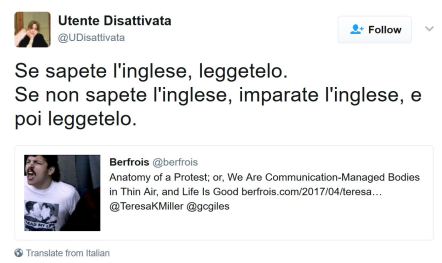 All thanks go to Russell Bennetts, editor of Berfrois, for his openness to messy explorations of complex subjects via experimental forms. If you want to help keep the journal ad-free and publicly funded, check out the annual campaign.

And if you don’t yet have your copy of Greg’s newest album with 20 Minute Loop, Songs Praising the Mutant Race (digital or vinyl), you can get it here.