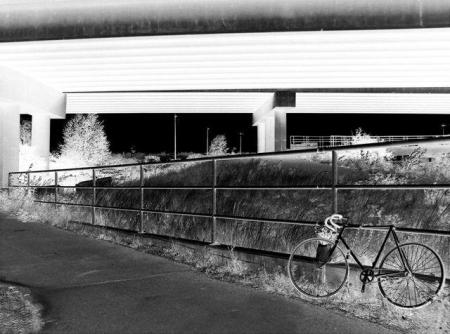 My father used to line up water bottles of diluted Tang and Country Time lemonade, pile up bagels on a sawhorse in the garage, turn on a VHS of the Tour de France or Giro d’Italia recorded from TV, and ride his bike on rollers. Rollers are different from a stationary stand; they consist of cylinders held together by a belt. The rider has to balance and move in a straight line to keep from sliding off the side. He’d watch the recorded race, and pedal, and eat his snacks for a couple hours at a time, Triplets of Belleville–style.

When I was ten and eleven years old, we rode a tandem two hundred miles over the course of two days in the Seattle to Portland Bicycle Classic, known as the STP. If I got cold or cranky during training rides, he’d belt out “Oh What a Beautiful Morning” until I begged him to stop. He did the STP by himself in one day a few times, and every day he rode his bike forty miles roundtrip to work south of Seattle. The path took him along the Duwamish River, and he’d report back about the growth of the Canada goslings.

When I was in college, his work schedule got overwhelming, and he fell out of the habit of riding. His bikes collected dust. He gained thirty pounds. Boeing gave him a leather bomber jacket, small consolation for decades of service, but the size he ordered was too small by the time it arrived. In grad school, I suggested we ride the STP together again. He got back on his bike, lost the weight, and didn’t care that I didn’t live in the same city or actually have time to ride with him.

He set out just after noon on St. Patrick’s Day of 2006 for his first STP training ride with a neighborhood acquaintance. I was in Chicago for a job interview. I sent him a quick email to let him know it went well, and my girlfriend and I headed out shopping. I received a call that afternoon from my mother. A 17-year-old had veered onto the bike path to get around a semi and get ahead in a street race. My dad was dead.

My mother and I had a florist make a wreath around one of his old bike wheels for the memorial service. The man riding with him, who escaped unscathed, brought us my dad’s watch, which had popped off in the grass. I asked him again and again, why didn’t you both get out of the way? If you were against a fence, couldn’t he have gotten in front of or behind you? There wasn’t time, he told me, and I asked again anyway, as if they were still in that moment, as if he could just scoot over and make room.

Six and a half years later, part of my brain still thinks I can go back to the minutes before he died, go back to when he was still alive, and keep him alive. I could call him and delay his departure for the bike ride. I could call him and tell him about the interview instead of sending him the email he never read—I know, because later I signed into his account to respond to the missives he couldn’t receive. I could respond to my own: It’s OK, I’m still here, come find me.

sped is not strictly autobiographical or narrative, but one launch point for the work came from my father’s death by vehicular homicide. The book has a time capsule quality. I wrote the first section a little over a year after he died, a year spent in a nauseous, grieving fog in Chicago, a city that might have drawn me in and amazed me under different circumstances. I’ve resurfaced since then, moved to two more cities, married a person my dad never met, returned to riding my own bike I couldn’t touch in the aftermath—accepted that any living I do will be without his bodily witness or participation. I’ve revised the poems over the years, but their emotional substance persists, each one a layer in an ice core.

The photo I’ve had up on this website and Facebook isn’t the cover of the forthcoming book, though I appreciate the positive responses. (Sidebrow is working on the real cover; I’ll keep you posted.) It’s a picture of my dad’s bike at the scene of the accident, three years later. The grass came back, the skid marks faded. The bike he rode that day, new and fancy and barely broken in, is still in police evidence. The one in the photograph was his first road bike, turned track bike, turned memorial. He wouldn’t have pictured the last use when he converted it to a fixie, before fixies left the velodrome, stripping it down so he could ride the rollers.

2 thoughts on “// this is not the real cover, and other stories”