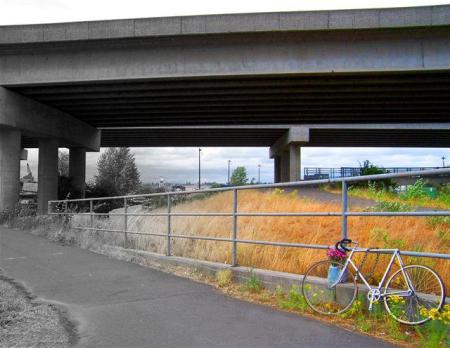 When I flew to Seattle for my father’s memorial service, my mother and I–and sometimes the people who streamed through my parents’ house for the days and weeks to come–sat on the back patio and stared out at Puget Sound. My mom smoked a steady chain of cigarettes. I folded, chest into thighs. We laughed with a primal force that bubbled up from our bones, and the laughter turned to sobs before we could take another breath. We didn’t hear the phone ringing inside, or we did, but the sound seemed a throwback from tasks in our fake lives, the ones before we emerged unwilling into what was real.

After the paper’s deadline had passed, we listened to the voicemail from the Seattle PI reporter asking for our thoughts. We called back that evening; this time it was the reporter who didn’t answer. So the one article that names my father draws from the police report on his death, not our knowledge of his life. To the public, he was a bicyclist killed by a car, pronounced dead at Harborview Medical Center–and on bicycling blogs, another statistic, cause for outrage.

sped unfolded from my preoccupation with the impossibility of sufficient memorial, from the knowledge that even for a poet, words cannot replace or restore life. Words fail. Well chosen, they offer what silence doesn’t, so I wrote anyway.

I am touched by the care West Seattle Herald reporter Ty Swenson put into capturing my father as a real person, in a piece published today about the release of sped. I come from a tight-knit neighborhood, a place that used to be a separate city and still feels a bit like a small town. I know there are members of the community glad to see this coda to the first article, people who remember him as I do, as everything before his head hit the windshield.